The final objects included in our exhibition tell a more complicated story of resistance to slavery—several with a connection to abolitionism, one of the more well-known forms of resistance. The ceramic jug entitled Slavery, for example, combines a devastating scene of a family separated during auction with popular iconography from Uncle Tom’s Cabin, written by anti-slavery author Harriet Beecher Stowe. Some of these abolitionist objects also reflect the perspective of the white artists and makers. The Emancipation Group sculpture suggests the celebration of the white savior abolitionist as well as the continued subservience and inferiority of Black people. In this way, the sculpture raises the continued issue of performative activism as a dishonest form of resistance.

Our exhibition concludes with contemporary interpretations of Black experiences in America. Kara Walker’s African/American subverts traditional representations by using the antebellum-style silhouette form to investigate intersecting identities of Blackness, gender, and sexuality. She explores the double-consciousness of being both Black and American. As a Black artist, Walker provides a far more nuanced portrayal of the Black body and experience in contrast with white artists such as Thomas Ball, who made The Emancipation Group. Finally, we conclude with Letter Q from An African American Alphabet.  In this photography series, artist Wendy Ewald collaborated with Black students to create photographs that amplify voices of  modern Black experiences. These artists underscore the importance of our exhibit in bringing the experiences and legacy of slavery to the contemporary viewer.

President Abraham Lincoln is depicted holding the Emancipation Proclamation and towering above a former enslaved man kneeling in a posture that makes him seem dehumanized and indebted below a ‘white savior.’ The column on which Lincoln’s hand rests features an image of George Washington, the former president and slave owner.

The artist Thomas Ball received a commission from a group of formerly enslaved Blacks who raised money for a statue to honor Lincoln and his abolition of slavery. He also made several other versions in larger scale, found outdoors near Washington D.C. and in Boston.  Following controversy,  the statue in Boston has recently been removed from public view. 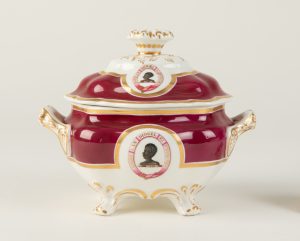 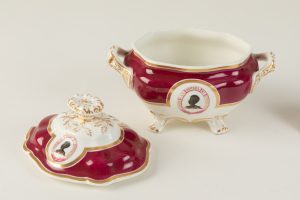 “A good conscience is the best shield,” translated from the decal in Welsh, protected the moral reputation of the Herbert family. The family commissioned this porcelain tableware to celebrate the passing of the Slavery Act of 1833 in Great Britain.

This early 19th-century porcelain Covered Sauce Tureen—a piece of tableware often considered to be a symbol of wealth—displays the translated message, “A good conscience is the best shield.” These words connect to the abolitionist movement in providing a critique of slavery.

This ceramic jug, an object of servitude, sparks many conversations about the experience of enslaved people in America. It makes particular use of popular iconography from Uncle Tom’s Cabin, though author Harriet Beecher Stowe reportedly disliked many of these images for their tendency to fetishize the violence of slavery. 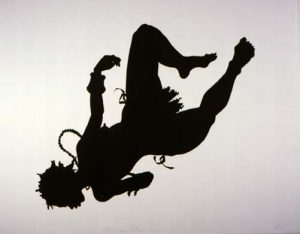 Reminiscent of Antebellum South-stye silhouettes, this image of an African American woman hovering in the center of the frame subverts the elegant art form and investigates the dynamics between racial stereotypes and sexuality. Kara Walker’s work often features grotesque stereotypes of Black people inspired by the classic film Gone With the Wind. 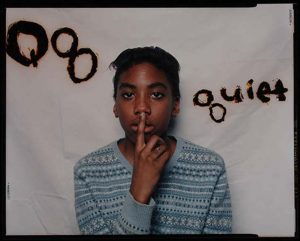 Wendy Ewald created the photography series American Alphabets to remake the building blocks of language to reflect different cultures. In An African American Alphabet, middle school students from Cleveland used letters and words from African American Vernacular English (AAVE). The letter “Q” was enacted by the gesture of a single girl whose finger on lips evoke the “shhh” sound of “quiet.” 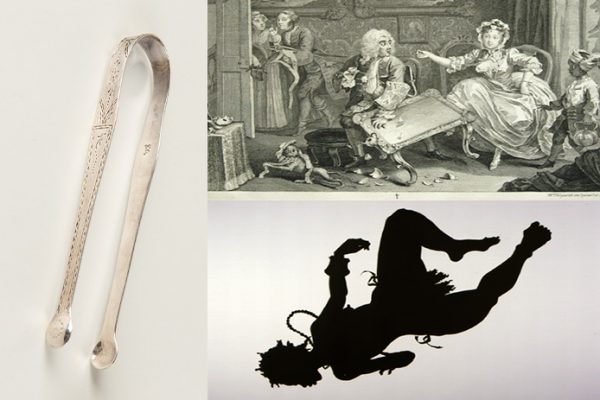